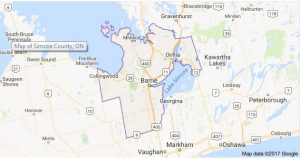 Simcoe County is located about ½ hour drive north of Toronto and is the largest county in Ontario. This area is commonly known as Huronia. It is bounded on the north by Georgian Bay and the District of Muskoka, on the east by the City of Kawartha Lakes and the shores of Lake Simcoe, on the south by The Regional Municipalities of Peel, York and Durham and on the west by the Counties of Grey and Dufferin.

The County is characterized by diversity. Geographically, it is positioned between the heavily urbanized Greater Toronto Area in the south and the rugged Precambrian shield to the north. County landforms range from the flat lying Elmvale clay plains and Minesing Swamp to the rolling sand hills of Medonte and highlands of the Niagara Escarpment.

Historically, it boasts the first European settlement in Ontario, but ironically, much of the land remained undeveloped until well into the nineteenth century. Today, agriculture is the predominant land use activity and there are still many side roads that see less than 10 cars a day. In contrast, one of the most modern automotive assembly plants in the world is located in Alliston, and Barrie boasts some city streets that are seven lanes wide.

The county is also a major recreational area. Water sports such as boating, skiing and swimming are popular on the many bodies of water, including the longest fresh water beach in the world. Fall colours and winter ski hills help to make it a year round tourist destination.

The northern part of Simcoe County in the seventeenth century was the home of the Hurons, an agrarian tribe allied with the French. French priests, first the Jesuits and then the Recollets, established missions near Georgian Bay. The Iroquois from upper New York state under the influence of the British, destroyed the missions and most of the people of Huronia. A few survivors fled to Christian Island in Georgian Bay. During the late seventeenth and the eighteenth century, the homeland of the Hurons became occupied by the Algonquin-speaking peoples, such as the group who eventually became the Chippewas of Rama. French or Metis fur traders made excursions into this territory and bought furs from the Algonquins who had usually obtained the furs from more westerly and northern tribes.
In 1815, a group of Scots from Sutherlandshire, who had been brought by Lord Selkirk to the Red River in Manitoba, made the long trek by rivers and lakes to the mouth of the Nottawasaga on Georgian Bay. Then they travelled from there overland and formed the first permanent European settlement in Simcoe County in West Gwillimbury.

After the War of 1812, the British became aware of the vulnerability of Upper Canada to American attack. The government began to plan alternate routes in the colony. One such plan was the building of the Rideau Canal and another was the extension of Simcoe’s Yonge Street from Kempenfelt Bay on Lake Simcoe to Penetanguishene on Georgian Bay. A “Naval and Military Establishment” was built at Penetanguishene. In 1828, a peace treaty gave Drummond Island to the United States and the population of this outpost were evacuated to Penetanguishene. Some of the soldiers were given small grants of land. Also, after Waterloo, a few persons settled along the Penetanguishene Road in the townships of Tiny, Tay, Medonte, Flos, Oro and Vespra between 1817 and 1820. By 1820, most of the townships were surveyed.

The largest influx of settlers came from the British Isles to Simcoe County in 1831 and 1832. In some places former soldiers were given free land grants, some groups such as the Roman Catholic Irish in Adjala or the “Dalhousie settlers” in Innisfil settled on adjacent farms, but, most of these people were individual settlers such as weavers and labourers who had been impoverished by the depression following the Napoleonic Wars. This stream of settlers continued into the 1840’s at a somewhat slower rate. The usual settlement route was up Yonge Street to Holland Landing and then by lake boat to such ports as Hawkstone, Orillia, or Shanty Bay.

During this period of settlement, today’s Simcoe County was a part of the Home District, the Simcoe District, then Simcoe County. The boundaries of the County were changed from time to time as when Muskoka, and such townships as St. Vincent, were part of Simcoe. In 1881, the townships of Mono and Mulmur were included in the new Dufferin County and in 1975, the townships of Rama and Mara in Ontario County, became part of Simcoe. In 1853, the first Canadian railway was completed, travelling from Toronto to Collingwood via Bradford and Barrie and in the next few decades, the railway was extended to Orillia and Midland. In the 1860’s, new settlers were often Canadian-born, coming from the older more established parts of the province.

After the U.S. Civil War, the Homestead Act offered free land in the American Mid-West and after the building of the first Canadian transcontinental railroad, the Canadian Prairies became accessible for settlement. Many members of Simcoe County families “went west” to either the U.S or the Canadian West. Gold discoveries in California, the Cariboo, and the Klondike, attracted others as did the great American industrial cities such as Detroit and Chicago. But, Simcoe County in 1900 remained primarily an agricultural county.

Links to register for upcoming online presentations and other Branch events can be found on the Branch Meetings page under the Events menu item.